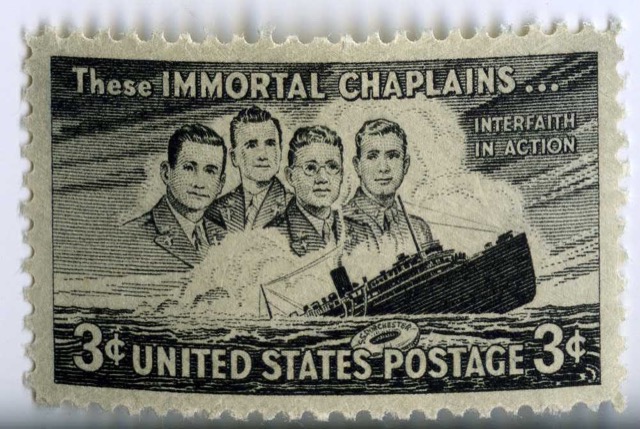 Carl Sandburg said, "Valor is a gift; those who have it never know for sure whether they have it until the test comes."

12:55 a.m.(0055) February 3, 1943 U223 periscope broke the freezing Atlantic Waters 150 miles from port fired a fan of 3 torpedoes A torpedo hit starboard side midship below the waterline Abandon Ship ... USAT Dorchester slipped beneath the waves in 20 minutes

The Chaplains spread out among the soldiers. They tended the wounded. They guided the disoriented to safety. They calmed the frightened. Each gave their life vests to the next man in line. One passed over their coat. Another gave up their only pair of gloves.

They all prayed and gave absolution to the doomed troops. They preached courage. They stood united in faith, courage, and selflessness. They were seen standing against the listing sinking ship. They recited prayers arm in arm. They sang hymns until they disappeared under the frozen water.

In 1944 next of kin received the Distinguished Service Cross and the Purple Heart Better late than never, 1961 President Eisenhower awarded a special Medal For Heroism One time award authorized by Congress had the same weight as Medal of Honor The Four Chaplains show the unity of faith, The respect for life and honor of responsibility and keeping an oath... May they guide us on our path of unity and respect.