The Hamsa, an Interfaith Perspective 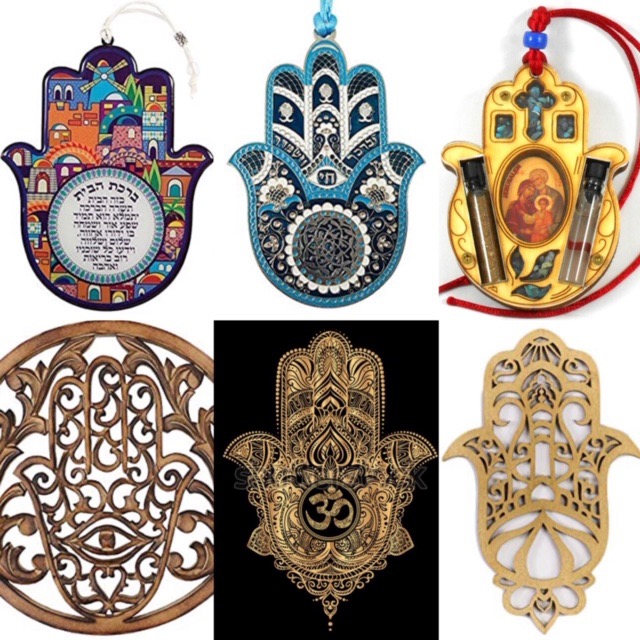 I love and collect Hamsas, the Jewish symbol of the Hand of God signifying protection. Over the decades, I discovered it to be a symbol that is interfaith in nature.

In Hebrew, the number five is "hamesh" and the fifth letter of the Hebrew alphabet is "Hey," one of God's holy names. "Hamesh" is representative of the five books of the Torah. In Judaism, it is also interpreted to be the Hand of Miriam (Moses' and Aaron's sister) and symbolic of the owner's five senses in an effort to praise God.

For Hindus and Buddhists, the image represents the chakras (major energy centers of the physical body with corresponding levels of consciousness), the five senses and their associated mudras (hand gestures) that re-direct energy flow throughout the body. If you look at Buddha's hand gesture of a straight-up open palm, one is said to feel the energy of protection, peace and a sense of strong, deep inner security.

In Christianity, the Hand of Mary was used to protect women, boost fertility and promote healthy pregnancies and strengthen the weak.

In Islam, Fatima was the daughter of the Prophet Mohammad. In the Sunni culture, it is associated with the Five Pillars of Islam. For Shi'te Muslims, it symbolizes the Five People of the Cloak where Muhammad gathered Hassan, Husayn, Ali, and Fatima under his cloak - representing protection and spiritual guidance. In Arabic, it is "khamesh."

Finally, the Jain religious symbol is a hand with a wheel on the palm. It symbolizes ahimsa which means non-violence. It is a symbol of peace and freedom.

So whether you hang a hamsa on your wall or wear one around your neck or place one on your desk, the meaning is protection, blessing and peace. May it be so!